Transitioning to a low-carbon economy is probably on the short list of most ESG investors’ top ambitions. But here’s the rub: most ESG investing won’t get us close.

Most ESG strategies are exclusionary, they allocate capital away from carbon-intensive businesses, and toward companies with a smaller environmental footprint, regardless of the impact those businesses have addressing the problem. According to an analysis by Morgan Stanley and Eurosif as much as 50% of all ESG directed investment dollars go to exclusionary strategies. This means investing in a technology company, for example, while outright avoiding the energy sector. While the intention is well-meaning, the long-term environmental result is negligible.

Real asset companies – which we define at Massif Capital as those in the energy, industrial and mining sectors – are the world’s largest carbon emitters. They also provide the critical feedstocks and materials on which the entire global economy depends. A meaningful reduction in global carbon emissions only takes place if these companies change their own business models. Ignoring them risks depriving capital to the business that will enable the adaptation of the economy to a low carbon environment or missing out on rewarding investments in business that have or are adapting to a low carbon economy.

A more impactful way for investors to facilitate a low-carbon transition would be to selectively invest in companies within these industries, allocating capital toward those companies that are either adapting their activities to a changing landscape or have clearly laid out plans for adaptation and avoiding or shorting the companies that are not. ESG variables are most valuable to investors when they are integrated into valuation, allowing a clearer picture of all the risks and opportunities a company faces. Depriving capital to entire industries at the backbone of the economy doesn’t help advance our common goal of a carbon free economy.

The oil and gas industry serves as an example. The sector provides more than half the world’s energy. As such, its role in sustaining developed economies and advancing developing economies must factor into the climate equation. Every country depends on affordable and reliable energy for robust economic growth and sustained improvements in quality of life. What’s more, many of the nation’s most dependent on oil and natural gas for government budgets are also the ones most at risk from global warming.

A feasible path to decarbonization must factor in economic growth, energy access and environmental conservation. ESG trends that simply push investors toward divestment derail the transition because it deprives the oil and gas industry of capital and makes economic growth and energy access in developing nations more difficult. The result is a less just transition.

Instead of divesting, oil and gas investors must ask smarter questions. Chief among them: Which companies can I allocate capital toward that have inherently superior carbon footprints due to the type of oil they produce?

As we highlight in our investment brief, Failure to Impact: Are ESG Funds Delivering on Investors' Ambitions, the difference can be significant. The average carbon intensity of oil fields in Canada, for example, is more than three times as much as in Saudi Arabia. And if the rest of the oil and gas industry can reduce greenhouse gas emissions to the level of fields in Saudi Arabia, the environmental impact would be quite meaningful, on par with replacing 250 million internal combustion engine cars with 100% renewable energy powered electric vehicles.

By allocating capital to well-managed oil and gas businesses with inherently lower carbon footprints, developing nations dependent on oil and gas revenue to fund their governments can avoid being deprived of much-needed development capital, and can pursue environmentally sound development of specific oil and natural gas fields.

This is the feasible path to a carbon neutral economy. Don't divest, reinvest intelligently.

This blog post is informed by our investment brief, Failure to Impact: Are ESG Funds Delivering on Investors' Ambitions. To get more information, including a comparison of the carbon footprints of oil fields in different countries and concrete examples of what sound oil and gas development could mean for the environment, download a copy of our brief report below. 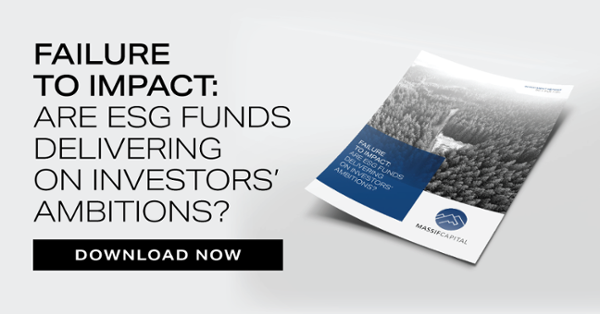 The Funding Conundrum: The Challenge of Financing Cleantech Innovation
10 Stats That Show the Role of Real Assets in the Energy Transition