A Brief Introduction to Fertilizer Markets

Everywhere we look, we are seeing shortages of natural resources and downstream goods. One industry that has caught our eye is fertilizers, which are in short supply and subject to significant input cost increases due to their dependency on fossil fuels. The linkage between hydrocarbons and agriculture is not always clear, but the following agriculture industry system map from a report by the Geological Survey of Finland provides a good diagram. 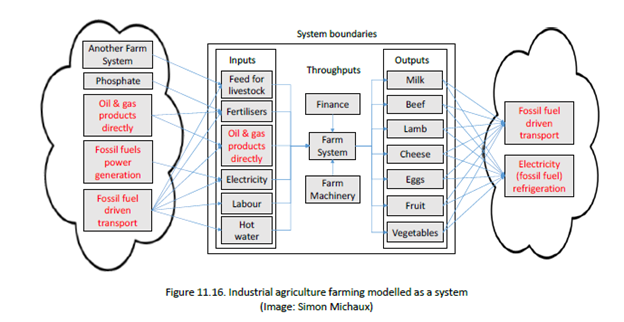 Both inputs and outputs of the system are dependent on hydrocarbons. Parts of the system have steppingstone solutions to decarbonize. In transport, we are beginning to see noteworthy advancements in battery and alternative fuel for freight. See the recent test of an EV hauling 14 tons of iron ore-related waste in subzero temperatures in Sweden. But overall, progress is slow, and in parts of industry non-existent.

In a recent conversation with a financial historian, it was pointed out to us that Joseph Schumpeter believed that depressions were caused by new technologies that disturb existing lines of profitability. Our familiarity with Schumpeter is more limited than we would like to admit, so we are sure there is more to it than we understand, but the idea has appeal in the context of our current energy evolution.[i]

Our current energy system produces low-cost energy and negative externalities associated with pollution that are unpriced by the market. To the degree that a shift in our energy system is underway, and those externalities are accepted as an additional cost by consumers, via increased demand for higher cost "clean" products, then disruption to the existing profitability of economically critical goods is certain. As this occurs, the distribution of industry profit pools will occur, with firms losing or gaining share in those profit pools.

As for depressions, we will not go that far out on a limb, but we are concerned about unforeseen impacts to critical industries via poorly understood industrial linkages. Disruption of the existing lines of profitability within the energy industry will ripple through the agriculture industry, raising costs for both producers and consumers. The winners to come out of this tussle and redistribution of the industry profits are likely to be those with leverage. As a globally critical input, the fertilizer industry may have the necessary leverage to benefit from a global reworking of the agriculture industry profit pool.

This year's rise in natural gas prices has little (in our opinion) to do with a shift towards cleaner sources of power, but this instance does appear to us to foreshadow what future price movements caused by supply degradation might look like. Put another way, the failure of oil and natural gas companies (except for frackers) to invest in growing production starting in around 2014 is functionally similar to what a possible future in an evolving energy landscape looks like.

During the 2020-21 season, global fertilizer use totaled 198.2 metric tons; nitrogen accounted for approximately 55 percent, while phosphate and potassium accounted for 25 percent and 20 percent, respectively. Of these, nitrogen is the most critical. Its price tends to be more volatile because of its direct link to natural gas prices and is an all but unavoidable cost for farmers. Our research suggests that farmers tend to apply nitrogen fertilizer at the start of each growing season as it gets washed away quickly. Other fertilizers can remain in the soil from season to season, allowing for more strategic application. Either way, some fertilizer is needed every year in the industrial agriculture system the world has come to depend on because the heavy planting does not allow for the natural replenishment of soil health, which creates the scientific basis for potential fertilizer industry leverage.

The supply-demand imbalance in fertilizer markets was tight at the start of this year as fertilizer-producing factories shut down last year to contain the spread of COVID and have since struggled to build back inventories. Farmers, on the other hand, continued to produce and, therefore, demand for fertilizer remained. This year, continuing supply chain problems and recovering demand across the economy put more upward pressure on fertilizer prices. Finally, with natural gas prices reaching new highs, operational costs have been so high that some European fertilizer plants have temporarily closed, and in China, rolling electrical outages have forced the suspension of production as well.

With winter approaching in the Northern Hemisphere, it's unlikely natural gas prices – and therefore nitrogen fertilizer prices – will recover before spring planting season. Enter the Governments concerned, as they should be, with food prices. Russia (the second-largest exporter of nitrogen fertilizer and third-largest exporter of potassium fertilizer) and China (the world's leading exporter of nitrogen and phosphate fertilizers) both announced measures to ban or restrict fertilizer exports through June 2022 – well past the spring planting season. EU sanctions on Belarus, the second-largest potash exporter, are also expected to reduce supply. Decreased availability on the export market will cause the price of all fertilizers, no matter the source, to go up as companies and countries bid against one another for what remains on the market.

The situation in the near-immediate term is one of supply-demand imbalance. In the longer term, the timeline associated with the energy evolution, we have a global population that between 1960 and 2010, has grown by approximately 3.9 billion people and is predicted to expand a further 3.7 billion people by 2050. This growth is estimated to require an increase in food production of 70 - 100 % on top of 2015 production levels by 2050, which is tremendous growth in a food production system dependent on petrochemical fertilizers dependent on finite non-renewable natural resources like natural gas and phosphate rock.

The potash fertilizer industry is highly consolidated, with four companies making up 65% of total capacity. In 2018, the most significant players globally in the potash market were Nutrien, Mosaic Company, JSC Belaruskali, and Uralkali PJSC. The phosphate industry is far less consolidated, with the top three companies making up 25% of the total market and various Chinese producers making up another 25%. Finally, the biggest market, nitrogen, is highly fragmented, with the top three participants having only ~15% of the global production capacity. The fragmentation in the nitrogen market is primarily a result of the wide availability of raw materials required to produce nitrogen fertilizers (natural gas, energy, nitrogen).

Investors have taken note of this intriguing industry setup in which a critical good, without alternatives, is being pressured on both the demand and inputs side. Dan Loeb, David Einhorn, and Bruce Berkowitz have all taken positions in firms that either produce fertilizer or inputs into the process in the 3rd quarter of this year.

The Massif Capital portfolio has long had exposure to the Potash markets via streaming deals held by Altius Resources (Ticker Symbol: ALS: CN), but there are many other ways to access this critical but challenged market. A few of the firms we are keeping an eye on include:

CF Industries (CF): Manufacturer of various nitrogen products for agricultural and industrial uses, including urea ammonium nitrate (UAN), ammonia, urea, and ammonium nitrate. It has also announced plans for green ammonia production, but that is a narrative/growth opportunity for the future.

Intrepid Potash (IPI): The largest producer of potash in the US. Its solar evaporation ponds provide one of the safest, lowest-cost, environmentally friendly production methods for potash. Intrepid also operates an underground mine in Carlsbad, New Mexico, to extract langbeinite, an all-natural fertilizer.

K+S (SDF:GR): Once of the five largest potash producers globally, responsible for roughly 9% of global capacity. Approximately ~47% of its agriculture sales are made up of specialties (e.g., sulphate of potash, or SOP). K+S provides investors access to European and North American fertilizer markets with limited exposure to Asia, allowing for a more geographic-specific fertilizer bet.

Nutrien (NTR: CN) One of the worlds leading producers of fertilizers and other crop nutrients. The company produces and distributes over 25 million tonnes of potash, nitrogen, and phosphate products worldwide.

OCI NV (OCI: NA): The fourth-largest global nitrogen producer with a 3% market share of the worldwide urea markets and ~20% share of the seaborne urea market. It has grown its capacity by 6x over the last ten years through a buy-and-build strategy.

PhosAgro (PHOR: LN): Russian producer of phosphate-based fertilizers and one of the world's largest producers.

Yara International (YAR.NO): European producer of a wide range of fertilizers and plant nutrients. The company is the global market leader in nitrogen fertilizers measured by volumes, sales, and EBITDA, built through a combination of organic investment and acquisitions in growth markets, most notably Brazil. Yara is also the operator of the worlds first and only electric autonomous container ship.

[i] Note we say energy evolution, as opposed to energy transition. As we continue to study our energy system, evolving has started to seem a more apt description to us then transitioning.